What makes NAPALM DEATH so special? Well, let’s think back 30 years: Would you have thought that a grindcore band from Birmingham would ever make it into the official album charts with some of the most infernal noise ever put on tape, enter the Guinness book for the shortest song ever recorded or appear in a prominent UK TV series named “Skins”? That it would be part of an Alice Cooper hosted episode of BBC’s Never Mind the Buzzcocks to guess from a couple of look-alikes who is the singer in NAPALM DEATH? Could you have ever imagined a down-to-earth lad named Mark “Barney” Greenway, a soccer fan (Aston Villa F.C.), vegetarian, prog metal freak and one of music history’s most renowned representatives of “cookie monster” style vocals would become a personality within the extreme music realm that is not about beer-drinking and hell-raising but synonymous with sounding hard while being smart? Well, that is where we are at now. From filthy, sweaty rehearsal rooms and tiny clubs and pubs NAPALM DEATH has conquered every music festival you can think of and toured through corners of the world a lot of bands would not even dare to tour while becoming famous for combining brutal music with political engagement and ethical values beyond the usual cliché of sex, drugs & rock n roll. And, as most fans will be delighted to hear, this remarkable story is far from being over…

Fourteen albums in (not counting the cover-platter “Leaders…Part 2”) three decades and NAPALM DEATH remain the leaders of the grindcore / death metal world, once again showing the upstarts how it’s done. Not content to simply wear the term “legendary,” the band has once again raised the bar on what it takes to remain at the top of the heap with its highly anticipated new album “Utilitarian”. While their past roster reads like a who’s who of extreme metal royalty, including Lee Dorrian (Cathedral), Bill Steer (Carcass), Justin Broadrick (Godflesh) and the late Jesse Pintado (Terrorizer) to name a few, it’s the current line-up of Mark “Barney” Greenway (vocals), Mitch Harris (guitars), Shane Embury (bass), and Danny Herrera (drums) that has kept the legend alive and seething. “Utilitarian” is the follow-up to the band’s much lauded 2009 album, “Time Waits For No Slave”, and sees the quartet return in expected raw and uncompromising fashion.

In the wake of a gruelling international tour schedule for “Time Waits For No Slave”, NAPALM DEATH finally got down to writing for “Utilitarian” in early 2011. It was recorded over the course of the year at Parlour Studios in Northamptonshire, UK with producer Russ Russell monitoring the mayhem, finally mixed and mastered in November. The end result is vicious and chaotic, but Greenway notes that “the ever-present darker, more ambient side of Napalm (references: Swans, My Bloody Valentine, Birthday Party et al) has now gotten faster, too – or at least the tempo of it varies so it’s not just exclusively slow and mournful. This gives it an extra, obtuse dimension. And hopefully people get lost in the frantic thickness of it.” “Utilitarian” runs the gamut from straight-ahead violence and force to pure, undiluted NAPALM DEATH-induced chaos that overall provides a well-rounded bloodletting that’s not for the weak and also confronts the listener with such surprising moments as the sax passages by none other than John Zorn on ‘Everyday Pox’ or choral-like clean sections in ‘Fall On Their Swords’ or ‘Blank Look About Face’. The latter is a perfect bridge to the album’s outspoken lyrical content as it viciously attacks politicians’ opportunistic talk that according to Greenway only knows one goal: “Say anything to tame a crowd – whether it is sycophantic praise, bullshit morality or rabble-rousing power-speak – as long as they can cling on to their place in the hierarchy.” True to the band’s tradition of spitting gallons of verbal venom, “Utilitarian” is an in-your-face razor-edged platter of social, cultural and political commentary. Far from being a placard-waving “cause” band, the quartet offer up personal views on the degeneration of society (‘Everyday Pox’), the arms trade (‘Fall On Their Swords’), sexual and gender expression (‘Gag Reflex’), the environment (‘Order Of Magnitude’) and aspects of everyday life for the common man (‘Collision Course’, ‘Think Tank Trials’) revealing Barney’s understanding of what to do with your life: “We have a finite period of existence that is all too easy to waste, and ultimately we all deserve happiness and contentment.” The bottom line is: Think for yourself, liberate yourself and don’t end up feeding the machine that all too willingly eats you up.

Ultimately, NAPALM DEATH are special because they never sacrificed their ideals for anything mundane, will continue pleasing their fans with a stunning record named “Utilitarian” and ceaseless touring activities in support of its release while provoking world leaders with all the rage and criticism you can squeeze into a song. Extreme music’s raised fist is back! 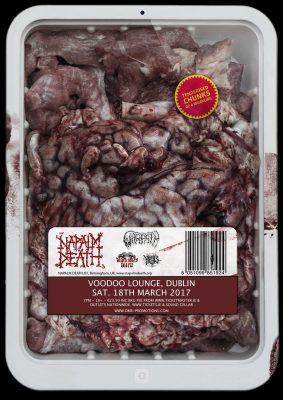