*** The MGLA tour will now take place in Oct-Nov 2021. Same support package. New dates for Dublin and Belfast will be confirmed soon ***

Mgła return to Ireland alongside Mord’A’Stigmata & Martwa Aura in October. See them at Limelight Belfast on the 29th and Voodoo Lounge Dublin on the 30th. Tickets on sale this Friday 10am.

Mgła (Polish for ‘fog’) is one of the most important Polish black metal groups. Founded in 2000, the band started to give concerts only after their third album in 2012. Since then, their melodic black metal pieces have drawn attention not only from enthusiasts of extreme music, but also from fans of alternative sounds from both home and abroad.

The melodiousness of their intense, powerful music; black and white covers; songs with numbers instead of titles: these are the distinctive features of the duo. They rarely perform (their concerts in Poland are especially infrequent) and are seldom present in the media. Mgła consists of two people: Darkside (Maciej Kowalski, drums) and M (Mikołaj Żentara, guitar, bass, and vocals).

Since 2002, M, born in 1981, is also a member of band Kriegsmachine; they have recorded six albumssince 2014. He is accompanied by Darkside and Destroyer, the guitarist of the Warsaw-based death metal group Hate. M has also released an album with the band Schmerz (2007). His solo ambient project is called Arca Funebris, and at the turn of the 1990s and the 2000s he recorded some noise-industrial tapes as Leichenhalle. M runs the record label No Solace, which co-releases Mgła’s albums. He also founded Harvester Records, and earlier he ran the D.R.S.C. record label. M is becoming more and more experienced as music producer; he also pays lot of attention to independently recording and mixing Mgła’s albums.

As M told the outlet Violence Online about the album With Hearts Toward None soon after it was released:

No one from outside the group interfered with our work, at any stage – we did everything alone, just the two of us – music, lyrics, records, mixing, the cover. In the end, I am always positively surprised with the fact that someone actually listens to it, and sometimes even likes it.

My older brother played guitar and drums, so as a kid I naturally picked something up. … I used to play piano, xylophone, and vibraphone, but I abandoned these instruments in favour of drums, which I’ll never forgive myself for.

Mgła was created in 2000 in Kraków, initially as a studio project. Before Darkside, it was Daren who played drums (earlier, an identical change of drummers took place in Kriegsmaschine). Darkside first performed with Mgła in 2012 and since then during concerts the permanent members of Mgła have been backed up by a bassist and vocalist, Shellshocked, and a guitarist – initially Silencer, and currently E.V.T. (from 2015).

In the aforementioned conversation, M spoke of their concerts in a calm yet engrossing way:

I’m not too eager to use terms such as ‘ritual’ or ‘ceremonial’ to refer to the what happens when a few sweaty dudes bang about and scream to a few hundred sweaty dudes in the crowd. Whether something happens between the members of the band and the audience is a separate thing. Giving a concert, we decide to expose ourselves to people and leave the interpretation open for the listener, instead of imposing or suggesting anything.

Having released the album With Hearts Toward None the group has started to give concerts and their career took off. But it was their next album – Exercises In Futility – which turned out to be a revelation. It sounds more incisively and clearly than the previous records of the group – there is no problem with decoding the lyrics, screamed out in English. The album was noticed by foreign media outlets – Chicago-based online magazine pitchfork.com praised it as ’majestic, nihilistic and ecstatic’.

Thealbum Exercises In Futility was put on the list of the best albums of 2015 by Noisey international magazine, British Crack Magazine and Swedish Gaffa magazine. Apart from that, Excercises… was mentioned as one of the best metal records of 2015 by magazines such as Decibel, Spin, and Consequences of Sound. In Poland, Exercises In Futility was listed among the best albums by CGM.pl and Redbull.com. Onet.pl has openly called Mgła one of the ‘best black metal groups in the world’.

However, neither member of the group identifies himself with the black metal scene. In the aforementioned conversation with Violence Online, M stated:

A few years ago I’ shrugged off the matter of the ‘scene’ as such, and I don’t care about black metal as a ‘movement’ or ‘community’, so I’m not really up to date on what’s going on. … I think that the only thing that constitutes black metal is the particular emotions of its creators, translated into music.

Whereas in an interview for Magazyn Perkusista Darkside said:

I don’t ‘understand’ black metal in any specific way. To me, it neither an idea nor a thought. It exists only in the sphere of emotions and feelings. When I say that, I mean this morbid state, which hits me when I realise my impermanence. A specific mixture of shock, fright and haze, and, in consequence, a defence mechanisms of the brain – despair, anger and feeling of unreality. I treat it more like a burden I would like to get rid off.

Emotions seem to be the key of Mgła’s records yet Polish critics usually perceive them through their technical or musical values. The improvement of technical skills of the musicians is of great importance, but it is mainly because – particularly in the case of extreme music – they translate into total control over the atmosphere, ambience, and emotionality. Both M. and Darkside seem to hold these as crucial values in music.

Mgła performed at Off Festival in Katowice. In 2017 the duo set to give concerts at festivals in Greece, Ireland, Scotland, Finland, Lithuania, and Slovenia.

Privately, M is the son of Edward Żentara, the Polish actor known chiefly from Karate po Polsku (Karate Polish Style) and Siekierezada (Axiliad),who died tragically. Maciej Kowalski, apart from being a drummer, works as dubbing director in the studio Star International Polska. He was responsible for the dubbing of games such as Diablo III, Medal Of Honor Warfighter, Battlefield 3, and Witcher 2: Assassins of Kings. 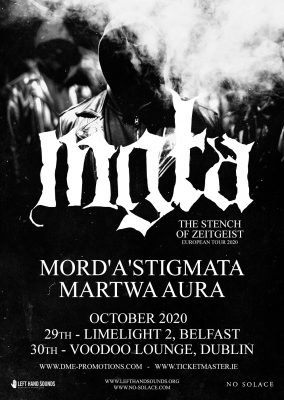