EyeHateGod + 7.5 Tonnes Of Beard + Burden Of The Noose

Eyehategod (also abbreviated and referred to as EHG) is an American sludge metal band from New Orleans who formed in 1988. They have become one of the most well known bands to emerge from the NOLA metal scene. Throughout the years, their core line-up has remained, with the exceptions of the bass guitarist, a slot in which several musicians have played, and the death of drummer Joey LaCaze in 2013.

Eyehategod have noted Melvins, Carnivore, The Obsessed, Discharge, Black Flag, Corrosion of Conformity, Black Sabbath, Celtic Frost, Confessor and Saint Vitus[2] as key influences to their sound. Heavy, detuned, and bluesy guitar riffs dominate the band’s discography. They are combined with walls of feedback and tortured vocals to create a harsh misanthropic vibe. Their records had been released consistently by Century Media Records though the band’s most recent output is on Emetic Records, not including the numerous splits released under various labels. The band was friends with Anal Cunt and performed with them for the first show after their frontman Seth Putnam came out of his coma.

History Early years – In the Name of Suffering Very little is known about early Eyehategod. Jimmy Bower and Joey LaCaze founded the band on April 20, 1988 (in accordance with 4/20 in cannabis culture), and they recruited Mike Williams, Brian Patton and Steve Dale. The band then recorded two demos Garden Dwarf Woman Driver (1989) and Lack of Almost Everything (1990); the latter was sent out to various labels. They eventually got signed to the small French label Intellectual Convulsion, and released their first album In the Name of Suffering on December 1, 1992. The album had a far more primitive and raw sound than later releases (as it was recorded very cheaply and the band members were fairly inexperienced), and had a more hardcore feel to it. The label dissolved with only a couple of thousand copies having been printed, so the band had to find a new label. They soon signed with Century Media however, who re-released In the Name of Suffering as it is known today. Also in 2006, In the Name of Suffering was re-issued with four bonus tracks. These four tracks were the same as those on the original demo Lack Of Almost Everything.

Take as Needed for Pain Eyehategod then went on to record Take as Needed for Pain in 1993 with new bassist Mark Schultz who had also contributed on In The Name Of Suffering. The album was recorded at Studio 13, a small label working from the 13th floor of an abandoned department store on Canal Street in New Orleans. The band played daily during this period to put down tracks for the album. At the time, Mike Williams was homeless (having been thrown out by his former girlfriend) and living in an abandoned, flea-infested room above a strip club just a few minutes away from the studio. The sound of Take as Needed for Pain seemed much closer to what the members intended than the material on In the Name of Suffering, and it shows a cleaner, more distinct sound with better defined riffs. The southern rock, blues and doom influences are also more distinctly felt on this album. After the release of the album, the band toured extensively with acts such as Chaos UK, Buzzov*en, White Zombie and Corrosion of Conformity. After touring, the band members briefly spread out in different directions. Mike Williams busied himself contributing to Metal Maniacs magazine. Jimmy Bower played drums on Crowbar’s Broken Glass as well as Down’s debut album, NOLA. Brian Patton recorded Soilent Green’s debut album, Pussysoul.

Dopesick The band had been recording several demos, which were released on various seven-inch records and splits on various labels, but finally in 1996 settled down to record a full length record, with Pepper Keenan of Corrosion of Conformity as producer, and new bassist Vince LeBlanc, which would be named Dopesick. At the time, Mike Williams was living in Clinton Hill, Brooklyn in New York City, and so had to travel between there and New Orleans frequently for the recording sessions. The recording sessions were infamously chaotic, and involved the studio owner reportedly calling Century to ask if the band were insane, and threatening to kick them out. This particular incident occurred after Mike Williams had attempted to record the sound of smashing glass for the introduction to the album, by smashing a bottle on the floor of the studio. In the process he slashed his hand open badly and bled all over the studio floor (this recording did make it to the record as the introduction to the first track, “My Name is God (I Hate You)”). One of the band members then apparently smeared the words “Hell” and “Death to Pigs” in Mike’s blood. Brian Patton and Joey LaCaze then flew out to San Francisco to mix the album. This album was far more chaotic than their previous, but still retained the distinct southern, bluesy feel, distancing it from In the Name of Suffering. The band then embarked on a US tour in the spring of 1997 to support the album, supporting White Zombie and Pantera, bringing their music to a far wider audience, raising the profile of sludge metal, and becoming (in)famous as one of its founding acts.

Confederacy of Ruined Lives Eyehategod then went through a period of internal disputes, and went on unofficial hiatus as its members scattered again to record and tour with their various side-projects; namely Soilent Green, Corrosion of Conformity and Crowbar. Eventually, in 2000, the band reconvened (again with a new bassist, this time Daniel Nick) to compile their various Take as Needed for Pain and Dopesick era singles, seven inches and split records into one record, Southern Discomfort. This reconvention gave them the impetus to knuckle down and record another album, and that album was 2000’s Confederacy of Ruined Lives. The album was a much more polished, sober affair, and so sounded distinctly more like a sequel to Take as Needed for Pain than Dopesick. After its release, the band then toured extensively (embarking on a world tour for the first time, with dates in Europe and Japan), while its members still juggled their various side-projects. During this time, Down recorded their second album, and Bower formed the mostly instrumental band, The Mystick Krewe of Clearlight, as well as Soilent Green releasing their third album. Mike Williams also founded Outlaw Order and Arson Anthem. During all this activity, Eyehategod found time to compile and release their live album 10 Years of Abuse (and Still Broke) (which was mainly released due to a contractual obligation with Century Media), and record and release yet more split records and 7 inches. With the release of their live album, the band were free of their contract with Century, and chose to sign to Emetic Records (with their fifth and current bassist, Gary Mader) for the release of their 2005 stop-gap compilation album, Preaching the “End-Time” Message, much in the vein of Southern Discomfort, but this time with some unreleased studio tracks.

Activity and personnel since 2005 Following the aftermath of Hurricane Katrina, singer Mike Williams and his now ex-girlfriend Alicia Morgan (a member of sludge metal band, 13) were arrested in Morgan City, Louisiana on a narcotics charge. Williams spent 91 days in the Morgan City Jail, and kicked his heroin habit.

With the help of his Eyehategod bandmates and supporters such as Phil Anselmo, Williams was released from jail on December 2, 2005. The band played a set at the 2006 Mardi Gras festival, the first since the disaster. Emetic Records released a various artists tribute album to Eyehategod on March 20, 2007, titled For the Sick. On August 29, 2008, the band celebrated their 20-year anniversary with a show at One Eyed Jacks in New Orleans. The band played a few shows in the American South in May 2009, and are on tour the same winter. They also performed at Hellfest in France in June.

Jimmy Bower announced in an interview that Eyehategod are still active and preparing a new album. The band played at the Inferno festival in Oslo, Norway, on 1 April 2010, and also played two sets at the Roadburn festival later that month. Eyehategod performed a new song called “New Orleans Is the New Vietnam” during their set at their July 1, 2011 show in Roskilde Festival, Denmark.

Drummer Joey LaCaze died on August 23, 2013 from respiratory failure.[5] Earsplit PR issued a press release on the life and death of LaCaze. The release states, “Doctors confirmed to family members that the cause of death was respiratory failure. He also suffered from long term asthma.” He had recently come back from a European tour and had celebrated his 42nd birthday.

On October 31, 2013, the band announced that Aaron Hill would be taking LaCaze’s place as drummer 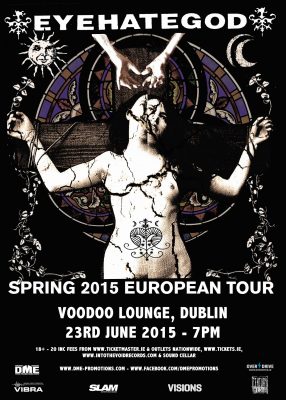