Delain + Evergrey + Kobra And The Lotus

Dutch symphonic metal band Delain have come a long way since their debuting record. Having toured the globe and carved their niche within the genre, the band is now preparing for the release of their upcoming fourth studio record. DELAIN have proudly revealed the front cover and track listing of their upcoming record “The Human Contradiction” that is scheduled for a release in April 2014 by Napalm Records. At this point, it is time to let you in on some of the juicy details!

“The Human Contradiction” is DELAIN’s fourth studio album, and the highly-anticipated follow-up to the 2012 release “We Are The Others”, which saw the band touring the globe and entering charts across Europe. Against the backdrop of this massive touring and releasing their special record “Interlude” which was introduced to the masses less then a year ago, DELAIN find themselves at top productivity with their upcoming 2014 release of “The Human Contradiction”, which is set to meet and exceed expectations set by its predecessors.

If anything, this productive flow of creative juices comes from DELAIN taking matters into their own hands for the creation of “The Human Contradiction”. Besides relying more heavily then ever on the team effort of DELAIN’s writing team consisting of DELAIN founder and keyboardist Martijn Westerholt, singer Charlotte Wessels and their long time musical partner Guus Eikens, DELAIN takes matters in their own hands by having Westerholt back in his trusted producer chair. He states: “It was a very special and inspiring experience, to create this new album together with Guus, Charlotte, my other bandmates Timo, Sander, Otto. This was fantastic teamwork! I think this is the heaviest albums we made so far. Also thanks to the mixing team of Fredman, and our guest artists. And I’m so much looking forward to present it to our fans!” The record was mixed by Fredrik Nordström and Henrik Udd at the legendary Fredman Studio’s (In Flames, Soilwork, Amon Amarth) and mastered by Grammy Award winning Ted Jensen of Sterling Sound, whose impressive credits include everything from Madonna and Billy Joel, to Muse, Marilyn Manson and Slipknot. The result is a massive sounding collection of songs in which you will be able to recognize DELAIN’s recent sound, but which forefronts the more dark symphonic approach of their earlier work. Elaborate orchestral sounds and the return of prominent grunts are prevalent on the album which features longer, elaborate tracks, with dark edges.

These dark edges run along both the instrumental and lyrical world, of which Wessels states: “The title “The Human Contradiction” is taken from one of my favorite books; Octavia E. Butlers trilogy Lilith’s Brood. A post-apocalypse story, in which the fact that humanity did not last is explained by our two most contradictory qualities; the fact that we are as a species both intelligent and hierarchic. This human contradiction causes an ‘us versus the others’ mentality, which in the book – as well as one could argue, in reality – proves to be a most self-destructive attitude. in a way, “The Human Contradiction” presents a broadening and deepening of the lyrical concept of We Are The Others: ‘otherness’ and how people relate to this, has had my interest for years. Whether it is otherness within our species, so towards people who are perceived as ‘different’ by other people (which was “We Are The Others” main focus) or in our attitudes towards non-human ‘others’, which is the lyrical addition made by our new record.”

One of the signature trades of DELAINs records has been the presence of guest musicians, and “The Human Contradiction” is no exception. Prominent is the much anticipated return of vocal force Marco Hietala on the powerful number “Your Body Is A Battleground” and the melancholic “Sing To Me”. The band states “After our collaboration with Marco on our first two records we can’t help but hearing Marco’s voice in some of the songs we write. We love his contributions on The Human Contradiction”. States Marco: “I´ve done quite a few visitations on select albums during my career. Delain and their albums are among the most frequent. If you listen to their stuff, you´ll know why. Martijn and his group seem to have plenty to say both musically and lyrically. Keep it up mates!” Another surprise is the appearance of iconic screamer Alissa White-Gluz on the epic album finale “The Tragedy Of The Commons”, showcasing both her clean vocals and her impressive signature screams. About the collaboration, Alissa recalls: “After a couple days of touring with Delain, I HAD to go buy a cd or two. This band blew me away with their intelligent songs, energetic yet extremely precise live show and overall charisma. Sure enough, after buying an album at their merch table and listening to it on repeat while working out, my suspicions were confirmed: DELAIN IS AN AWESOME BAND! I’m very flattered and honored to participate in their upcoming album. I see Delain going very far, I wish them nothing but success and I’m glad to contribute my share!” Returning to the roots of their debut record Lucidity, “The Human Contradiction” also features George Oosthoek laying down some brutal grunts on the heavy Tell Me, Mechanist.

DELAIN will return to the road to introduce “The Human Contradiction” to the world, starting with Dutch club shows in March, continuing in April when they join Dutch rock force WITHIN TEMPTATION on a full fledged European tour, followed by a festival season that will see its finale in a grand USA tour with SONATA ARCTICA and XANDRIA in September. Keep your eyes on this site for tourdates and more information about the upcoming record. 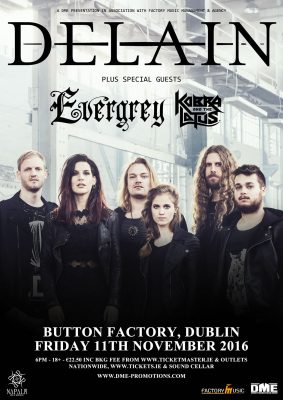