Decapitated make a long awaited return to Irish shores next February when they hit Voodoo Belfast on the 14th and Voodoo Lounge Dublin on the 15th. Special guests Dyscarnate, Baest & Bloodshot Dawn. Tickets £18/€20 on sale Thursday 11th October @ 10am.

Decapitated are pleased to announce a string of UK/IRE dates as part of their ‘Killing The European Cult 2019’ tour. Accompanying the four piece on the road in February will be death metallers Dyscarnate from Horsham, UK and Baest from Aarhus, Denmark.

Decapitated guitarist Waclaw “Vogg” Kieltyka said: “Last weekend we played Mammothfest UK to a fully packed venue, which makes that night very special. The show was amazing and it was a truly magical night. After the show I was really grateful for all you who showed up, talked with us and showed us your support. Maybe you don’t know but IT MEANS A LOT!!

Moreover I am more than happy to announce our return to the UK. I am honoured to inform the metal community in UK/IRE that DECAPITATED will be heading back in February 2019!

Since our debut album “Winds of Creation”, the UK has always been a second home to me. We have never felt like strangers and I simply love to play here, and every time I jump on stage I know I’m in the right place. I have so many memories from old times and many friends who support us and are ready to help. Maybe it sounds a little bit sentimental but after the hard times we had last year, I appreciate everything 1000 times more than ever.

That’s why I am super excited to also have Dyscarnate and Baest on our UK/IRE tour. Dyscarnate is a well-known band especially in UK and they just crush live! Baest has THIS energy you want to see in every band during a show. Both bands are amazing, have great music to share with people and I am sure they will dominate the metal scene faster than we think.

This line-up will destroy everything on it’s way. Join us in February for “Killing The European Cult!”

Tickets will go on sale Thursday October 11th @ 10am UK time from the below links:

‘Kill The Cult’ comes from their latest studio album Anticult, which was released on July 7, 2017 via Nuclear Blast Records. The video was directed by Łukasz Jaszak, who previously directed the music video for ‘Never’ and created the cover art for Decapitated’s three most recent albums. 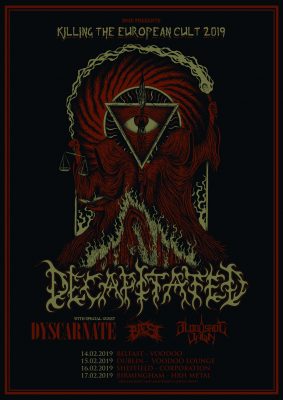