Having recently released their critically acclaimed early demos collection ‘The First Damned’, Decapitated are proud to announce that 2022 will mark their return to Europe-wide touring. The 33-date trek, launched in celebration of their 25th anniversary, will see the masterly death metallers hit stages across 11 different countries.

Decapitated’s Vogg commented: “25 years in the band… Wow, I would have never ever guessed it would survive that long. But time flies and we are still here as strong as ever, with the new album almost there and an amazing line-up, ready to get out on the road again. This is just the beginning! We are ready to discover, learn and conquer more than before!!! So, let’s celebrate together and let’s have some fun friends!”

Formed in 1996, Polish tech death masters Decapitated built a reputation over the years as one of the international leaders of their genre. Over their 25-year career, Decapitated have released seven studio albums, which are considered to be some of the most influential death metal releases of the 21st century.

Officially released via Nuclear Blast for the first time, Decapitated’s early demos have not been remixed, remastered or messed with in any way. Instead, they are a blistering snapshot of four young men with fire in their bellies and a bright future ahead of them.

Also check out ‘Destiny’ (Demo, 1997) that the band released as a first appetizer to Decapitated’s early works, launching their emotional journey from the past. The single is available on all digital streaming platforms and for download. 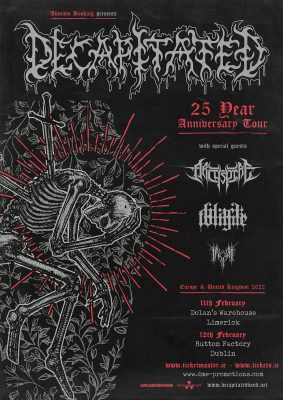