Sadly the Corrosion Of Conformity shows in April have been postponed due to the ongoing Coronavirus situation. New dates are being worked on and will be announced soon with existing tickets remaining valid.
Band statement: Given the current global situation due to the Coronavirus, we have no choice but to postpone our upcoming European dates with Spirit Adrift until spring 2021. We are very sorry that it has come to this but the health and safety of everyone is the most important factor right now and we look forward to seeing you all once we are back on the road when this has all blown over. – Corrosion of Conformity

The almighty Corrosion Of Conformity will return to Irish shores in April 2020! Pepper Keenan & co. will hit The Academy, Dublin on Sat April 25th and Limelight, Belfast the following night. Special guests Spirit Adrift. Tickets on sale Wed. 18th December @ 9am from Ticketmaster and usual outlets.

Whenever CORROSION OF CONFORMITY releases a new album, folks take notice. But their latest is a true event. It’s been a dozen years since C.O.C. recorded new material with vocalist/guitarist Pepper Keenan at the helm. In that time, there have been rumors, whispers and outright allegations that the legendary Southern rock outfit would reunite to blow the doors off the whole damn scene again. In 2014, after nearly a straight decade traversing the globe as a guitarist with New Orleans supergroup DOWN, Keenan reconnected with the core C.O.C. trio of Woody Weatherman, Mike Dean and Reed Mullin to hit the road hard. “Reed called me and mentioned maybe playing a couple shows,” Keenan recalls. “I said, ‘Let’s just go to Europe and see if it works.’ So we went to Europe and then ended up going back four times in one year. Then Nuclear Blast gave us an offer and we didn’t even think about going anywhere else. We ended up touring for a year and then started tracking about ten or 11 months ago.”

Ladies and gentlemen, the long wait is over. CORROSION OF CONFORMITY have returned with »No Cross No Crown« – an album that somehow sounds as though no time has passed between 2005’s »In The Arms Of God« and today. Some of these new jams sound like could’ve easily been on »Wiseblood« or »Deliverance,« two of C.O.C.’s most revered records. “Yeah, that was kind of intentional,” Keenan nods. “We weren’t trying to manipulate it to sound like other records, but that type of songwriting is what we do. It was important that we made an album – I didn’t want to write ten or twelve songs in the same key with the same guitar tone or some shit. We took each song on its own and tracked ’em completely individually.”

Recording in North Carolina with longtime producer John Custer, C.O.C. cut »No Cross No Crown« in about 40 days over the course of a year. “We took our time and didn’t put any pressure on ourselves,” Keenan says. “I’d go up from New Orleans and we’d do four or five days at a time, just hacking away at it. It was fun because we did it like a demo, but in a studio. We were writing and putting it on tape at the same time. We took what parts we thought were great from the old days and weren’t scared to go backwards. It kinda wrote itself that way.”

The first song the rejuvenated foursome wrote together was ‘Wolf Named Crow,’ a hard-knocking rocker with that classic C.O.C. swing. “I had a crazy-looking black dog with blue eyes named Crow,” Keenan explains. “I was walking him through the hood where I live in New Orleans and this young kid was tripping on my dog, going, ‘Damn! Is that a wolf?’ I said yeah. Then he goes, ‘What’s his name?’ And I said, ‘Crow.’ And he goes, ‘Damn! He got a wolf named Crow!’ Then he ran off telling his buddies and shit. And I was like, ding! So I took that idea and manipulated it into a song about being hunted.”

Of course, the band recognized that any new C.O.C. album with Keenan out front would be analyzed, scrutinized and held up for comparison with aforementioned gems like »Deliverance« and »Wiseblood«. “That was in the back of my mind the whole time,” Keenan acknowledges. “The big thing for me was trying to write songs that have the same attitude and caliber that we were used to doing. I didn’t wanna get out there like some 50-year old dude making a mediocre record.”

On »No Cross No Crown,« beefy Southern stompers like ‘The Luddite,’ ‘Little Man’ and ‘Forgive Me’ are interspersed with melancholy guitar interludes like ‘No Cross,’ ‘Matre’s Diem’ and ‘Sacred Isolation’ – just like SABBATH used to do in the ’70s. “We started doing that on »Deliverance,«” Keenan points out. “My theory on that is that if you’re trying to make a record flow, you need to break it up a little. When you need a breather, write an interlude. I like writing those mellow pieces just to space things out and make the next thing come in heavier.”

The album’s iconic title comes from a recent tour stop in England. “We were playing this old church from like the 1700s that had been turned into a performing arts center,” Keenan recalls. “The dressing room had stained glass windows and one of them showed this poor fella being persecuted. Underneath it said, ‘No cross no crown.’ So I just took that idea. We’re not trying to be on a soapbox, but we used it as a catalyst to write songs around.”

Which is to say that »No Cross No Crown« has a lot less to do with politics or religion than its title implies. “I think everyone needs to get away from that mindset in general,” Keenan offers. “It just seems to be a mess out there nowadays. We need to get back to being humans and taking care of each other and simple things like that. For us, the terminology ‘No cross no crown’ is a theme. It’s mentioned in like three songs throughout the album. We just weaved it through as we went.”

Of course, C.O.C. with Pepper Keenan is a very different proposition than the three-piece C.O.C. that recorded 2012’s self-titled album and 2014’s »IX« in his absence. “It’s two different animals, which is a weird position to be in because we’re not doing those songs when I’m playing with them,” Keenan says. “We’ve got so much ammunition from the records that I did, so we’ve always kinda stuck to that.”

“It’s a strange rock n’ roll conundrum, but it could be worse,” he adds. “It could be the David Gilmour/Roger Waters thing, where they go separate ways with two different bands. That’s not worth it. When you see bands do that, you think, ‘Dude, just bury the hatchet and jam. It’s not that hard.’”

Not that C.O.C. ever really had a hatchet to bury. “It just kinda fizzled out,” Keenan says of his involvement with the band back in the day. “The record label fell apart after »In The Arms Of God« and I moved back to New Orleans and went straight to DOWN. It’s just another chapter in how this shit works. But how you overcome it and get back together is how you’ll be judged.”

»No Cross No Crown« stands as irrefutable proof of C.O.C.’s ability to overcome. “C.O.C. and the prior records I’ve done with them didn’t just go away,” Keenan observes. “It’s an honor to be back out there and have an opportunity to do it again in a real way and not some washed-up reunion thing. Even before we wrote the record, we were out there for a year seeing there was a demand for it and that there was a void that we could fill. That’s been C.O.C.’s deal from day one. We’re not chasing anybody around. We’re not gonna worry about what the new trends are. C.O.C. is C.O.C.” 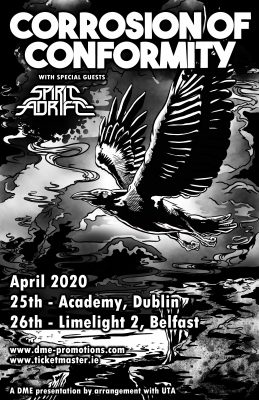