Conan are a British doom metal band from Liverpool, England whose style is characterised by a heavily distorted and downtuned sound. It has been described as “caveman battle doom”.

Conan was founded as a two piece by guitarist/singer Jon Davis in 2006, with Richie Grundy on drums. Following the departure of Grundy, Paul O’Neil took over on drums before the band went on nearly a year-long hiatus. Once activity resumed, the band added the position of bass guitarist and went through several musicians before Chris Fielding joined in 2013. Longtime drummer O’Neil, who had performed on both of the band’s full-length albums, was replaced by Rich Lewis in 2014. On 31 March 2015, the band announced that they would be headlining a US tour with support Samothrace and Mantar. The tour consisted of 11 dates, including Psycho California and Maryland Deathfest. 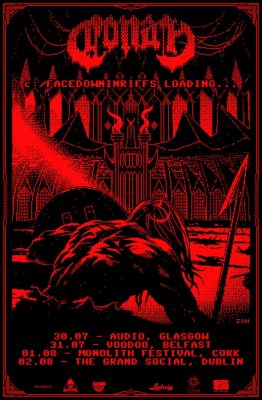