Bolzer & The Ruins Of Beverast

Bölzer are a Swiss extreme metal band that formed in Zürich in 2008. The band have said that the meaning behind the name is “a powerful force or blow or strike that has no regard for the consequences or the repercussions. And in that sense it’s not directed either, it’s just a chaotic strike of energy…. a force of chaos, and a force of life and death and anything.” To date they have released three EPs, and their debut studio full-length album Hero was released on November 25, 2016 on Iron Bonehead Productions.

The band’s 2013 EP Aura generated substantial acclaim from music critics and metal fans. It has been frequently described as one of the best metal releases of 2013 by sites such as NPR Music and Stereogum, despite its brief length. NPR have described the band as “one of 2014’s biggest extreme metal success stories”.

The Ruins of Beverast is a German extreme metal project formed by Alexander von Meilenwald in 2003. Five albums have been released under the moniker through Ván Records. Since 2013, von Meilenwald has also performed live with an expanded line-up under the band’s name; however, apart from occasional appearances by session musicians, he continues to perform all instruments and vocals on the band’s studio material. Der Spiegel called the third album Foulest Semen of a Sheltered Elite a “highly complex” album and rated it 8 out of 10. The album Exuvia was released in 2017. It was well received by the metal press. Metal Hammer Germany rated it 6 out of 7, metal.de 9 out of 10 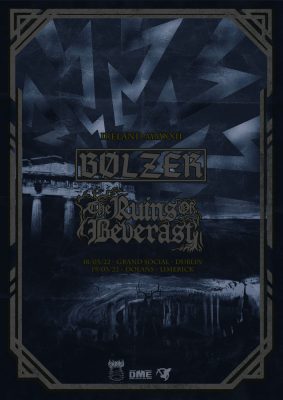