Norwegian avant-garde metal legends Arcturus will come to Opium, Dublin on 9th February 2022 as part of their ’31st’ anniversary celebrations. Special guests will be Denmark’s Iotunn. Tickets on sale 8th October @ 10am.

1987-1990 Before Arcturus, there was Mortem, a death metal band formed in 1987 by Steinar (Sverd), Jan (Hellhammer), and Marius. Mortem released the Slow Death EP as a demo cassette, and later as a 7″ EP on the French underground label Putrefaction Records. There are no other known recordings with this band.

1990-1993 Mortem changed their name to Arcturus in 1990, as they wanted to play a different style of music. The line-up still consisted of Jan, Steinar and Marius, and the My Angel 7″ was released the following year, also on Putrefaction Records. After this, the band was put on ice for a while because of the departure of Marius, and due to the fact that Steinar was no longer interested in playing the guitar and wanted to concentrate on the keyboards.

1993-1995 Arcturus recruited Samoth as their new guitarist in 1993 while the young Kristoffer Rygg (Garm, of Ulver) joined as the new vocalist. The band recorded the Constellation mini-CD, which was released in 1994 on Samoth’s record label Nocturnal Art. Constellation was meant only to be distributed as a promo for the upcoming album, and was thus limited to only 500 copies. Samoth left the band in 1994, partly because he had to serve a short prison sentence, and due his musical priorities being with other bands. This mini-CD is today a highly sought after black metal classic.

Carl August Tidemann joined the band to replace Samoth on guitars, and the band (together with Ulver’s bass player Skoll) recorded their debut album Aspera Hiems Symfonia in 1995. The album consisted of the four songs featured on the mini-CD, plus four new compositions. The album was released on the Norwegian label Ancient Lore, and licensed by Century Media the following year for US distribution. Arcturus played a concert in the fall of 1995 at the release party of the album. Carl left the band after the recording, and was replaced by Knut Magne Valle.

1996-1999 In late 1996, Arcturus started the recording of their follow-up to Aspera Hiems Symfonia, which was to be titled La Masquerade Infernale (originally the album was intended to be named The Satanist). Released through the British label Misanthropy, the album was recorded over a period of almost 6 months, together with an authentic string quartet and a session appearance by Simen Hestnæs. This extremely innovative album was a huge success among music critics, and made Arcturus widely known and respected in the music scene. Six remixed tracks from La Masquerade Infernale, along with one new track and one re-recorded track from Aspera Hiems Symfonia appeared on the 1999 release Disguised Masters. Several Norwegian artists from outside the metal scene collaborated with Arcturus on this album’s remixes, creating some of the weirdest and most experimental material that Arcturus has released to date.

2000-2003 Not much was heard from the band for a while, and rumours said that Arcturus had broken up. Sometime in 2000 however, the band started the recording of the 2002 album The Sham Mirrors, which was to be the last release featuring Kristoffer Rygg on vocals. The album also featured a new bass player; Dag F. Gravem filled the gap after while Hugh Mingay took a short break from the band. The Sham Mirrors was finally released in April 2002, through the band’s own label Ad Astra Enterprises. After the release, the band disappeared from sight, and again the rumours of a split circulated. In early 2003, however, the news of the band rehearsing for upcoming live shows appeared. At the same time, it was announced that Kristoffer Rygg had left the band, and was to be replaced by Spiral Architect singer Øyvind Hægeland. Arcturus performed live at two festivals in Norway that year, at the Southern Discomfort Festival in Kristiansand, and the Hole in the Sky festival in Bergen. 2004 In September Arcturus went on a mini tour in Hungary, Germany, Italy and Greece, with excellent feedback. The line up for the live shows grew even stronger after these gigs, so they decided to keep on doing their theatrical avantgardistic performance more in the future. Øyvind decided to leave Arcturus because of work commitments. Simen Hestnæs has taken over the part as permanent singer for the band. In December they entered studio to produce their forthcoming album

2005 The band played as headliner at Inferno London in January with first apperance of Simen, and Inferno Oslo in March. The new album Sideshow Symphonies was released in September. A one month European tour was performed in October. BIO WILL SOON BE UPDATED… 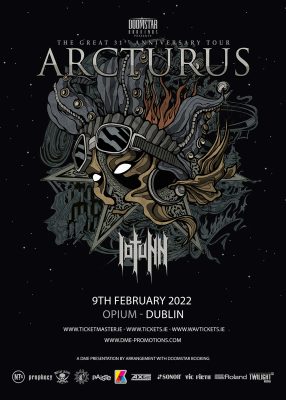