Andy James is one of the world’s top new Metal and Shred guitar stars with amazing technique, phrasing and all round ability. Andy’s talent has been recognized by guitar stars including John Petrucci, Mark Tremonti and Rusty Cooley, and he’s also played alongside Zakk Wylde, Paul Gilbert, Guthrie Govan and Vinnie Moore and many more.

Now a globally renowned guitarist with thousands of fans to his name, Andy has been featured by magazines such as Total Guitar and Metal Hammer as one of the world’s best.

A Youtube phenomenon with millions of views, Andy is an online legend famed not only for his incendiary playing, but also his tutorials and DVD’s released with leading companies such as Licklibrary and Jamtrax.

Andy has several acclaimed solo releases to his name as well as two successful albums with Sacred Mother Tongue, and is a well-respected metal session guitarist.

From festivals such as Download, Sonisphere and Bloodstock, through to European and Far Eastern tours – including China and India – Andy has played all over the world on some of the largest stages around with bands including Sacred Mother Tongue, Cradle of Filth and The Fields of the Nephilim.

Famed for his performances at the world’s top Music and Guitar Industry Shows – including NAMM in Los Angeles and the Frankfurt MESSE – Andy is a top endorsee for Laney Amplification, EMG Pickups and ESP Guitars. The release of the ESP LTD AJ-1 Andy James Signature guitar in 2013 highlights how Andy’s star is rising amongst the industry.

With several exciting new album releases and live tours also scheduled for 2014, Andy takes his legendary tutorials to a new level with the launch of the Andy James Guitar Academy…

The timeline goes something like this… ​ 2001: I pick up the guitar at age 15. My teachers: Nirvana, Metallica & Chevelle amongst many others.

2003: I start writing music as a solo instrumentalist after playing in local bands.

2008: Revelations is finally released after years of crashed hard-drives, no money and spending over a year of my life homeless. It does well enough to catch the attention of 40 Below Summer; we join forces with members of FLAW to create Black Market Hero.

2009: The Speed of Dark is released in October. I continue to perform tons of dates with both Black Market Hero and AV. After two years with BMH, I leave and begin to write my next solo record.

2011: Universal Language is released. This begins my working relationship with Will Putney/The Machine Shop who produced, mixed and mastered it. The album was very well received with much, to my surprise, critical acclaim.

I begin writing for Away With Words Parts 1 and 2.

2012: I’m approached to join Vext, a supergroup consisting of Tommy Vext (Divine Heresy, SNOT) and members of Mutiny Within (including my drummer Bill Fore). We write and record our debut release titled Impermanence. We shoot a video at New York’s Beauty & Essex with a mighty fine lady. We started to play out often, many dates with AV on the same bill. We had an absolute blast, however, when it came time to sign deals your homeboy just wasnt ready.

2014: Away With Words Part 1 is crowd-funded, released and again produced by Will Putney and Randy Lebeouf at The Machine Shop. I document the experience in a 4 part video documentary. I come back with a humdigger of a video for the song “.. _ _ _” (Two). I embark on my first out of state tours. I shoot another video for “. _ _ _ _” (One).

I lose my best friend, Rich Forcellati to ALS in December of 2014. Losing him was such a wake up call; I realized that the only thing worst than living with regret was to die with it. So 5 months later….

2015: I quit my day job, put all of my trust in my fans and headline my first full US + Canada tour. 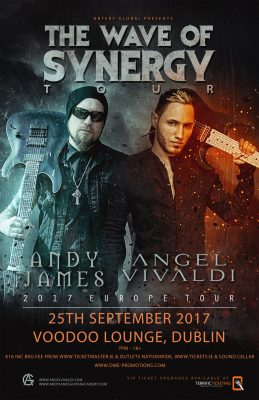