UK thrashers Acid Reign hit Ireland as part of their ‘Tour Of Entitlement’. See them at Grand Social, Dublin on Sat. December 7th and Voodoo, Belfast the following night.

We (Acid Reign) are a British thrash metal band formed in 1985. The group was active until 1991, when they disbanded.

Acid Reign’s line-up for the most of the time was Ramsey (drums and keyboards), Adam (guitars), Mac (bass), Kev (guitars), and “H” (vocals). At one point, future Cathedral member Gary “Gaz” Jennings also played guitar with the band. After they disbanded, Kev moved on to join Lawnmower Deth, under the moniker “Baron Kev Von Thresh Meister Silo Stench Chisel Marbels”.

The band started the ball rolling with the “Moshkinstein” demo in 1987 and were picked up by British thrash specialists under one flag in 1988 for their first E.P. Moshkinstein (EP) gaining some good support slots such as Flotsam and Jetsam and Death Angel. Acid Reign struck up a friendship with label mates Nuclear Assault and Exodus, toured the UK and Europe as support to the ” Survive Tour” and “Fabulous Disaster Tour”. Acid Reign toured with Nuclear Assault again in 1989 across Europe with Dark Angel and Candlemass after the release of their first full album The Fear. Their second album “Obnoxious” arrived in 1990 to mixed reviews and the band broke up after parting ways with long time record label Music For Nations. They finally signed off with a legendary show at the London Marquee club which saw fans stage diving from the T-Shirt stand in the foyer prior to the gig, Les from the “Vic Reeves Big Night Out” show providing the strangest support set of the century and Smith diving off the balcony at the end of the bands final set.

Lyrically, the group tackled a multitude of issues, ranging from the criticism of censorship “Creative Restraint” and the anti-nuclear testing message of “Joke Chain” to the b-movie science fiction of “Phantasm” and to downright silliness, as on the CD bonus track for their album Obnoxious, “This Is Serious”.

On May 5, 2015, Acid Reign announced on their Facebook page that they have reunited. Frontman Howard “H” Smith, who is the only original member of Acid Reign involved in the reunion, commented, “Finally the rebooted line up is complete, it’s taken nearly two years but I can honestly say it’s been worth the wait. Typically we’re doing things differently to everyone else as where they reformed (and believe me we tried) we are now rebooting. Everyone in the band has Acid Reign in their DNA, some of the guys knew the band back in the day and some didn’t but everyone is on the same page and we can’t wait to get out there and show the world how much it has been missing us.” 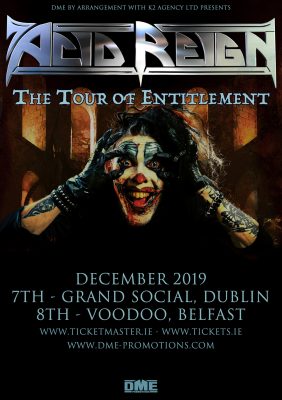